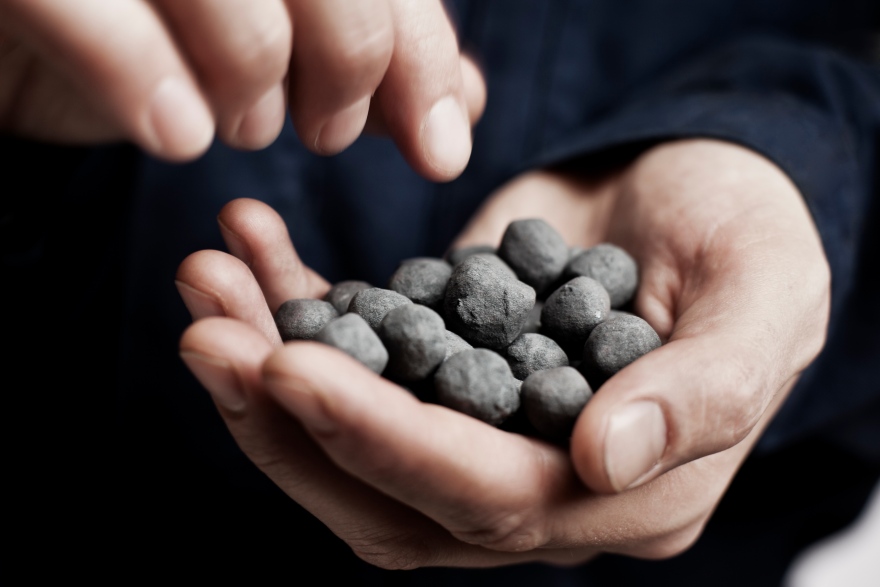 Central to Hybrit's research project is to create a completely fossil-free value chain. Within the framework of the Hybrit initiative, SSAB, LKAB and Vattenfall want to be the first in the world with a fossil-free value chain for steel, starting already in the mine and processing plants. One of the work packages therefore studies the possibility of developing fossil-free pellet production by changing the heating technology in the process. Primarily, they want to replace the use of fossil fuels with fossil-freealternatives.

Oxygen from Hybrit in pellet production

In addition, it is of interest to investigate how oxygen, for example formed in future hydrogen gas production within Hybrit, could be used for fossil-free pellet production at LKAB. This research is conducted by Luleå University of Technology in collaboration with LKAB. During pellet production, the iron ore (Magnetite), is converted to Hematite by oxidation. To make the pellets strong and reducible, they are heated up to about 1200-1300 ºC and when Magnetite is converted to Hematite, an energy-generating reaction takes place and the resulting  heat can then be used to heat the pellets.e.

In addition to using the heat that is released when the hematite is formed inside the pellets, today the pellets are heated by adding some form of external fuel. Researchers are now investigating how an increased amount of oxygen in the conversion of Magnetite to Hematite affects heat generation. In LKAB's pilot plant in Malmberget, researchers in Process Metallurgy are studying what happens in the iron ore pellets and the pellet bed when different amounts of oxygen are added during the pelletization. How do different amounts of oxygen affect the heat development from the pellets and what happens inside the pellets? Is the process happening too fast? How much heat can we get with the help of oxygen?

Eventually the oxygen that is formed in the hydrogen production for Hybrit can be used, so that you can replace the external heat sources used today..

Within this work package, researchers in Energy Engineering and Economics at Luleå University of Technology also study how an increased supply of forest biomass for the production of renewable fuels for LKAB's pellets plants affects the market for forest biomass in Sweden. If LKAB wants to go from fossil to renewable fuels made from forest residues, such as tops and branches and by-products from sawmills, what effects will it have for today's users of forest biomass?

The researchers model different scenarios, where they study what happens to existing users of the forest biomass, if LKAB increases the use of biofuels in the pellet plants. The scenarios also take into account increased demand for forest biomass for carburization of the hydrogen-reduced iron ore (see below).