Jan Frostevarg with the first "test cubes" from the new 3D printer. 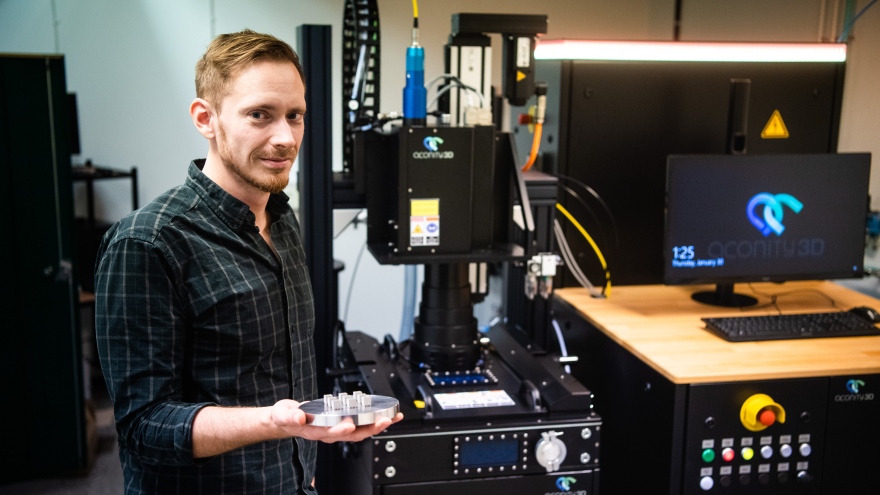 Jan Frostevarg and the 3D printer for metal. 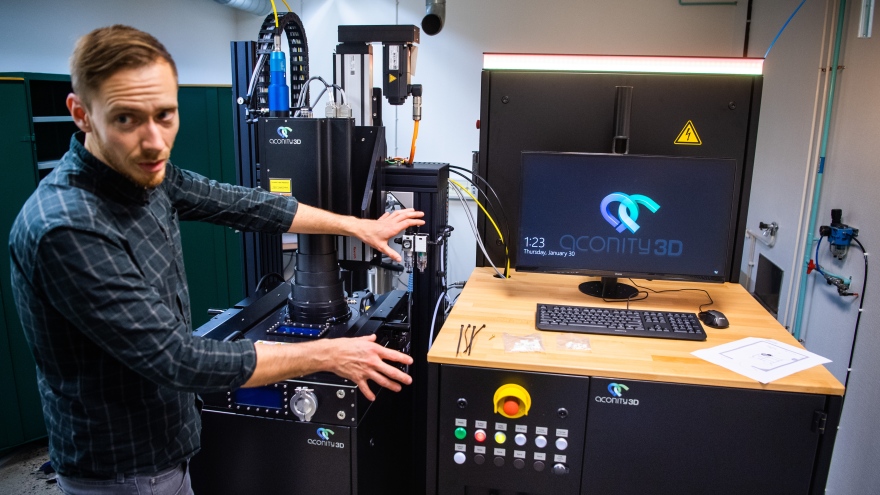 The project is a collaboration between the universities of Luleå, Oulo, Finland, Tromsö, Norway and Arkhangelsk, Russia. It is a continuation of the project "C3TS" where the same actors were given funding to spread knowledge about the new manufacturing method.

The new project is now entering a more concrete phase, where a recently installed 3D metal printer at Luleå University of Technology has an important role to play.
– The idea is that we should inform companies in the region and help them get started with this way of manufacturing. In some industries, it can be absolutely crucial to long-term competitiveness, says Jan Frostevarg, project manager.
The companies will have the opportunity to receive support throughout the process, from design to finished print, and the hope is to contribute to a faster transition in the manufacturing industry.
The printer, the only one of its kind north of Sandvik and Östersund, cost just over SEK 2.5 million.

3D printing in metal as a manufacturing method means a radically different way of looking at manufacturing and is often referred to by many as "the future of manufacturing".
– Instead of removing materials like in conventional manufacturing, such as drilling and milling, you add material. It provides more efficient production, and can lead to less material consumption, lighter components, increased functionality and less assembly, says Jan Frostevarg.
According to him, the manufacturing method is a powerful complement to conventional manufacturing and is excellent for companies that produce complex and expensive products in small series.
– With Mekinor as a partner, together we will find applications where it is particularly profitable to use 3D printing. We have previously had contact with, for example, Tooltech in Töre, a company that manufactures tools for the industry and is ideal for this manufacturing method. This is exactly the type of company we hope to reach more of, says Jan Frostevarg.

Can make a big difference

– This has been big in the research world for a long time, and there are some large companies that have invested heavily in the technology, such as Siemens Turbomachinery and Sandvik Coromant, but the other manufacturing industries are lagging behind, says Jan Frostevarg.
According to Frostevarg, the reasons are mainly high investment costs, but also lack of knowledge and habitual ways of working.
– It can be difficult to quickly see possible applications where a transition to 3D printing can really make a difference, says Jan Frostevarg.

The hope is that companies will notice that it can actually make a big difference for their own production.
– It would have been great if we could help any company so that they actually get started with production, says Jan Frostevarg.

The project began in late 2019 and will last three years with a budget of approximately SEK 10 million. The main financier is the EU via Kolarctic.