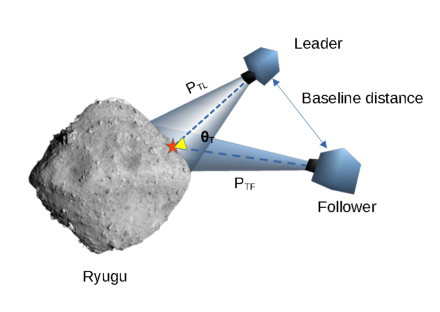 This article considers the 3D visual coverage problem of an asteroid by establishing a stereo-visual based sensor from monocular cameras. The cameras are individually mounted on two small low-thrust spacecraft, which are maintained in a tight stereo formation using a nonlinear model predictive control scheme to maintain an overlapping field-of-view and a specific baseline distance. The proposed control algorithm adopts a leader-follower architecture to define the relative pose of the spacecraft. However, asteroids provide a challenging environment for such missions due to their rotating nature, irregular shaped bodies with a low (micro) but irregular gravity field. Moreover, the coupling between the orbital and attitude dynamics of the spacecraft need to be accounted. As a result, this article considers a full-state nonlinear control approach to plan correction maneuvers to maintain the desired pose of the spacecraft. The efficiency of the proposed control scheme is demonstrated with a realistic simulation scenario where the results are also visualized in the Gazebo simulation environment.