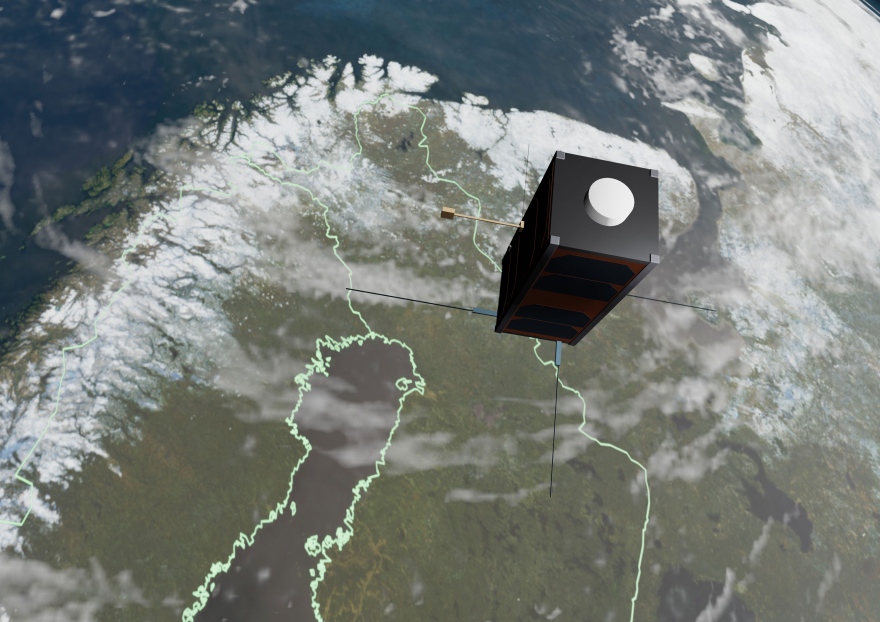 This is what it can look like when KvarkenSat is eventually in orbit over Kvarken. View original picture , opens in new tab/window

In addition to the parties, the project is funded by the EU's Interreg Botnia-Atlantica project, Österbottens förbund and Region Västerbotten. The project ends 2022 and the satellite will be launched into space during the end of that year or in the beginning of 2023.

– Through this project, we hope to establish a procedure that helps us creating new missions with less effort and resources, and gain momentum in the creation of nanosatellite missions. This mission has potential to improve our research in system engineering and attitude dynamics, says Chris Nieto, postdoctoral researcher in Space Systems at Luleå University of Technology.

KvarkenSat is a so-called CubeSat; it weighs two kilos and is about the size of a juice package. The satellite will be launched in just over a year and will be in an orbit that allows it to pass Kvarken, the narrowest stretch of the Gulf of Bothnia between Sweden and Finland, three to six times a day.

A ground station at the University of Vaasa will control the satellite and the space data coming from the satellite will be available to several actors, such as the region's residents, companies and schools.

KvarkenSat is thus a small satellite that will orbit Earth at a relatively low altitude, just a few hundred kilometers up from the ground. However, there are several challenges when it comes to the complexity of the task. The small size places high demands on the construction, not least in relation to the payload.

– First, we have the technical challenge of fitting four payloads to in a two kilos satellite. Additionally, we have the challenge of coordinating all the institutions involved in making such payloads, says Chris Nieto.

– We will collaborate with the engineers at the Swedish Institute of Space Physics on the qualification of KvarkenSat, by testing environmental conditions such as vibrational stresses and temperature changes in vacuum with the new equipment and infrastructure that we have at the university.

Like most satellites, KvarkenSat consists of antennas, a computer and an electrical system with solar cells and batteries. And of course, payload. For example, there is a hyperspectral camera onboard. The images from the camera can be used to monitor, analyze and model properties of land, sea and vegetation as well as to detect emissions and pollution. There is an AIS receiver, Automatic Identification System, on the satellite, it can monitor ship movements in the Gulf of Bothnia and other sea areas.

The satellite also has a GNSS receiver, a Satellite Positioning System. The purpose of the GNSS receiver is to collect in-orbit data to improve the precision of the positioning algorithms for space applications. Of particular interest is the use of the European Satellite Positioning System Galileo to measure KvarkenSat's exact orbital data. The measurements can also be used for other purposes, such as atmospheric research.

– We learn a lot from this project. It is very small in size and cost, but the project requires great effort to conduct due to the many different disciplines that are involved in making a satellite no matter the size, Chris Nieto concludes.

The satellite will be launched into orbit on the second flight of Isar Aerospace Technologies' Spectrum micro launcher, scheduled for either 2023 or 2024.