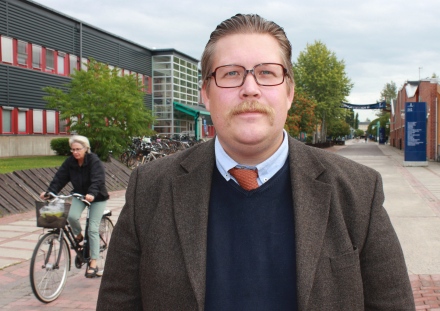 Simon Matti, a political scientist at Luleå University of Technology

- So the view of commentators and some political scientists, is that politicians are controlled too much by their constituents in their decisions, do not match. In environmental issues, it is just the opposite, says Simon Matti, a researcher in political science at Luleå University of Technology.

This according to a new survey of all over 13 000 politicians in the municipality and county in Sweden in 2012, ie the elected politicians who sit until the election on September 14th 2014. Response rate is at a staggering 78 percent. There are researchers at several universities in Sweden who are behind the investigations presented in book form. Politicians have responded to a series of survey questions, a number of which pertains to the environment. For that part, Professor Sverker Jagers and political scientist Simon Matti, at Luleå University of Technology are responsible.

- It turns out that politicians, regardless of party, believe themselves to be more environmentally aware than their constituents, and than the people at large, says Simon Matti.

What is really interesting from this point of view, is that when politicians then will make a decision on environmental issues, it's much more personal involvement, and above all the personal concern for the environment, that is decisive, not how politicians perceive that the voters think.

The most important factor to make proposals on environmental issues, however, is the position of an environment dedicated politicians in county and municipal councils. For it to be any result, that person must sit on the environment committee or be a team leader in the council.

- We researchers know, that the Swedish voters have a strong environmental commitment, and even want more on environmental issues than what the politicians want. So politicians are not listening too much to their constituents when it comes to environment, they should listen more, says Simon Matti.