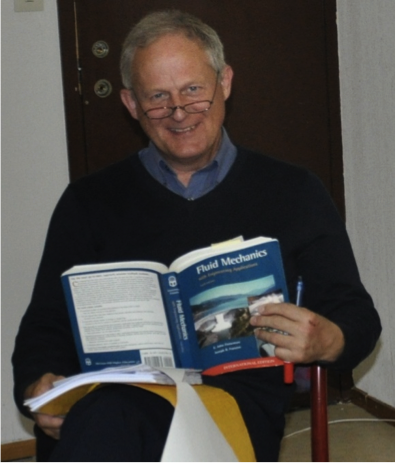 Håkans main area of ​​research is the transition from laminar to turbulent flow and Håkan was one of the first in the world, perhaps the first, who discovered transient growth of disturbances in the laminar flow field. Despite continued diligent research of Håkan and others are the direct mechanisms behind this phenomenon is unknown and whose discovery would lead to the Nobel Prize, probably the only one in fluid mechanics. Case still open.

Nationally, Hakan had several assignments including the TFR which then went into the VR and he had for example a very large part in turbine technology program, and that this program became SVC. Håkan has also acted as a reviewer in various contexts. At LTU, Håkan developed and renewed the main courses in fluid mechanics, the more engineering Hydro mechanics and the more research-oriented advanced fluid mechanics. Håkans strong commitment to this and his desire for the students to learn something is hard to describe in words. Håkan has also shown great enthusiasm for undergraduate education in general, perhaps more than many other subject representatives.

Håkan is very interested in sports and exercise orienteering, cross country skiing, running and hockey. For a while it was almost that everybody was forced to play floorball at the department and no graduate students who did not play floorball hired, almost. His biggest hobby is perhaps beekeeping. Håkan has two groups of societies a group of Åbyn (Byske) at Åby river and one on Porsön. These communities and the forest that Hakan has in Åbyn was overall one of the big reasons that Hakan pulled down its operations at LTU few years ago. In winter, however, he has still a lot of activity at LTU with his own research projects, some teaching and as an expert and advisor to several research projects. When I am traveling, I am often asked what Hakan is doing. On Håkans suggestions, I answer: He is working on his resume.