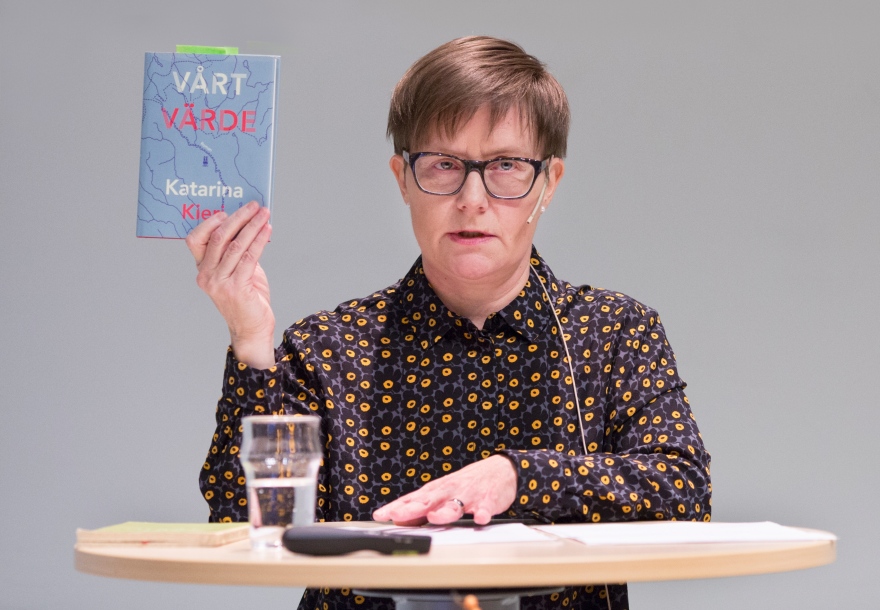 - I especially want to thank Professor Anna Nordenstam for nominating me, said Katarina Kieri during her lecture at the Luleå University of Technology

Katarina Kieri comes from Luleå and has her roots in the Torne Valley. Her writing includes both drama and prose, and is intended for all ages. So far, she has written four collections of poetry, two novels and eleven children and young adults books. This year, she has published two new works: children's book Another Abbe and the novel Our value. Her poetic lecture entitled To round moths revolved around the writing process and how writing can preserve the words.

- The surface of the pen tip fits all, freedom is in the pen. You can become infinite, you can be whoever you want and do whatever you want. You can become God, said Katarina Kieri and pointed out that fiction writing is not about results but about the courage to fail.

- You must be true to your intent and start over and start again. Dare to trust that what you write, even if it is thrown away, are a prerequisite for what si to be written later.

Catherine Kieri alsp read a passage from her poetic novel Our value. A book strongly marked by her Tornedalen roots and growing up in Luleå during a time of strict language policy and assimilation of the Tornedalen identity.

- I would term the time of my childhood, the time when the country stood on the crest of the social structure but were blind to their outskirts. I also want to portray the relationship around that I came from a culture that shut me out because the language policy adopted was so effective and convincing that it got thousands of people not to bring their mother tongue to their children, said Katarina Kieri.

Young people's reading habits, or lack there of, are discussed extensively in these times. But Katarina Kieri, whose writings focus on the young and the importance of language, do not think that the issue of reading can be reduced to a youth problem.

- I think there is a problem that affects the whole of society. Thereforethe literature and art fills a vital role as it could contribute to a more complex and nuanced picture of life, and in the black and white time we live in now, the literature has much to offer.