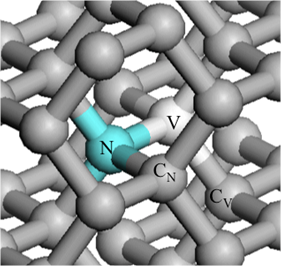 The negatively charged nitrogen-vacancy (NV) defect in diamond has properties that make it an ideal sensor for the measurement of electronic and nuclear spin in practical applications. The NV center has a paramagnetic ground state with long coherence times that can be initiated by optical radiation (spin polarization) and the electronic spin state can be read optically, all at room temperature. We are interested in applications with a single NV-center detector which has been realized for single external electron spin detection and detection of neighboring nuclear spin, the application of nanoscale magnetometer. This requires near-surface NV centers, and there is a knowledge gap in the area and the local environment affects the NV-centers characteristics.

Doped fullerenes are also possible quantum bits. Our work with fullerenes began with the then controversial issue whether N and P were bound or unbound inside the C60, and their resulting magnetic state, which is important if they are to be used as qubits.hese molecules have the longest spin lifetimes reported, and several schemes have been proposed for their use in quantum computers. Our study was followed by a generalization of the bonding/non-bonding of group V atoms to flat and curved graphitic surfaces.