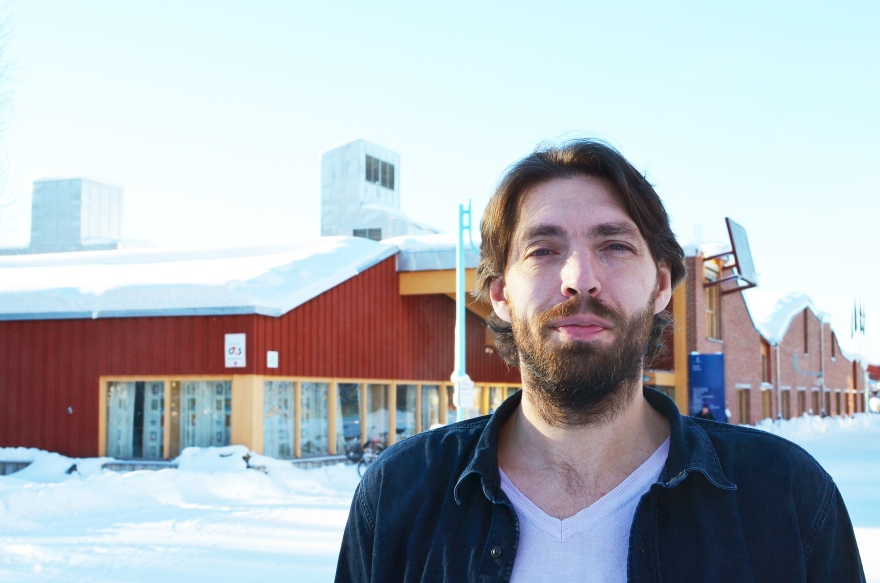 – It feels great to move to LTU, it has really been a boost for me. Everyone is so positive and there is a great energy here. People approach me and many want to see me, it's really inspiring, says Andreas Larsson.

What attracted Andreas to the northern latitudes of LTU was the opportunity to start up his own research group in Applied Physics:

– The privilege of having your own team and fully be able to pursue your own research with others at LTU attracted me. I knew many talented researchers at the university that are close to my field, for example Sven Öberg and Alexander Soldatov. Now I get to know many more.

Any concerns over the winter and the cold disappeared already in 1989 when Andreas did his military service as a telegraphist at S3 in Boden. He hope to get his family to Luleå in the near future.

– My wife Jeanette is also a researcher, in primary health care, and she has begun to see if there is a research base for her in Luleå. She looks forward to come and meet people here.

From chemistry to physics

– At first I was a postdoc at University College Cork in Ireland at a research institute called the Tyndall National Institute. They conduct research in microelectronics, towards the needs of the semiconductor industry, and I worked with potential future material for phones, computers and quantum computers. It was for example molecular electronics that we will use maybe in 10-15 years, a very exciting area. Then I started at Uppsala University as a post doc at materials theory.

2004 Andreas was back in Cork, where he stayed until 2010. That year he got another child which led him to return to Sweden and Uppsala. From 2013, however, his workplace is Luleå University of Technology, where he as previously mentioned is going told to build the new research subject of Applied Physics.

The research area that interests Andreas Larsson the most is about nanomaterials that will be used in new technology. He for example studies carbon nanotubes, a material which could be used in transistors to make computers faster

Andreas Larsson has also received funding from the Swedish Research Council for research into quantum computers based on diamond and possible components for quantum bits, a project that starts when the Andreas begins his new position at the university.

– Quantum computers is a parallel development, these are computers for problems other than the computers we currently use to compute with. The classic example is actually bank codes, we have the long 18-digit code that is safe to send because you need to break down the numbers in their prime to crack the code, which would take forever with classic computations. But with a quantum computer, you would have the solution directly, says Andreas Larsson.

The question is what practical applications these quantum computers can have, something that is not yet fully clear according to Andreas:

– We do not know where the mathematics will lead us, to break up large numbers into primes is just one application. Algorithms for quantum computing is a research field of its own. In my field, where we make calculations in electronic structure theory based on quantum mechanics, one can imagine that these computations would be more convenient for quantum computers.

Andreas Larsson looks forward to work with his new colleagues at LTU, for instance those in the other physics research subject, Experimental Physics, that will start up within short.

– To simplify, one can say that we apply the laws of physics in the computer while the experimental physics team work more in the lab. We can help to understand and explain the experiments they do through our calculations. I also think there will be opportunities to collaborate with other research subjects, I have already talked with researchers in tribology, materials science, and mathematics.

Andreas is also asked about his leader philosophy, now that he becomes a chair professor and team leader.

– As the leader of undergraduate and graduate students, I have a very clear philosophy, and that is for them to learn the entire research process. Not just the craft of making literature research, calculations and interpretations, but also how you write and publish. I let the PhD-students take care of all communication with the editors and journals, and then I supervise that process instead. I like to make written notes on paper and explain how I thought and why I changed something. There should be no hocus pocus about how a text is completed, and editing is about to finally learn reviewing what you have written yourself, which is the hardest.

– As a group leader, my philosophy is that everyone should feel that they are working on something that they like. I love my job and it also include tasks that are not as fun, but they are limited in time. Therefore, I want those who work with me to feel so much joy that they take the less fun parts with a bit of a breeze. We will share the responsibilities and burdens, both the good and the bad, and I will not put myself in a dictator role. I want to create a research group with functioning teams, fun publications and more project funds. I see it as an advantage if the researchers have different skills with them so that we can spread out the special knowledge of the group and relate to different parts of the literature when we publish, then it becomes more interesting and we get more readers.

Andreas Larsson's spare time consists of time with his wife and three children. He also likes basketball and he has played in Division 1 in Sweden and the basketball league in Ireland.

– I still play but at a lower level and it's very fun. I also coach the youngest in our basket team in something called ball school. It's more play then basket but we have great fun.