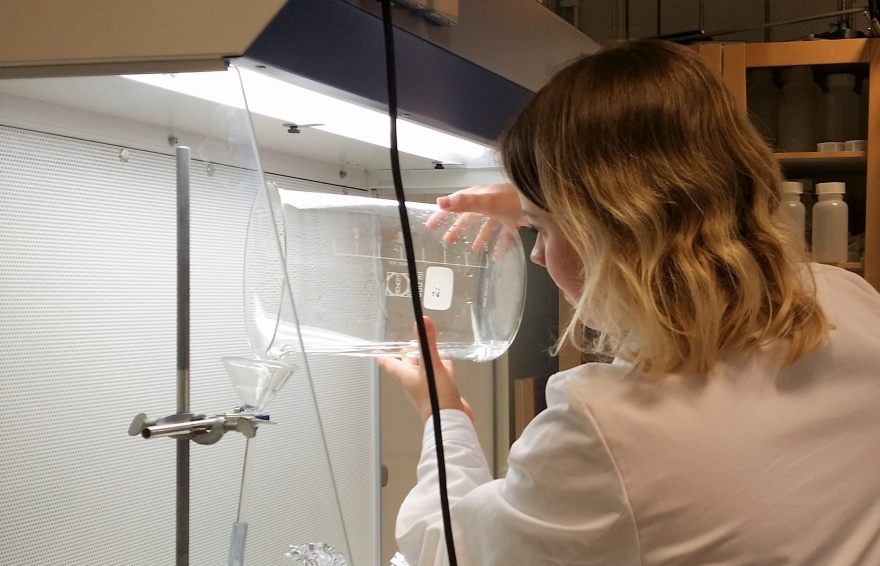 Lovisa has during the spring term of 2018 taken samples and analyzed microplastics and other micro-debris in snow from urban environment. She chose to focus the sampling on untouched snow and took samples from various green areas in the central town, in a residential area and in a commercial and industrial area.

"The method of testing snow and taking the samples through the entire snow cover to study the presence of micro-debris has not been seen in any previous study. It is a good method for comparing the results between different locations. Since the particles have accumulated for a long time, even since the snow settled, you risk not taking their samples just when there are temporary and short-lived low or high values, which in that case becomes misleading,” says Heléne Österlund, supervisor for this thesis. .

After the snow samples were taken, they were melted in labs and filtered through two filters of 300 µm and 50 µm, respectively. The filters were analyzed under the microscope by categorizing and counting the number of particles on each filter. It can be seen from the results that the most common category was black anthropogenic particles such as combustion particles and road wear. The second largest category was fibers (including both natural and synthetic). Black rubber particles were detected in samples from sites near busy roads and were assumed to be tire wear. Only a few plastic fragments were completely detected throughout the study. In the case of snow melting, one can expect that some of the particles will linger and become trapped in the grass while others will follow with melt water to the recipient.

The occurrence of micro-debris in snow is thus important knowledge to bring in the work of preventing the spread of microplastic and other micro-debris.