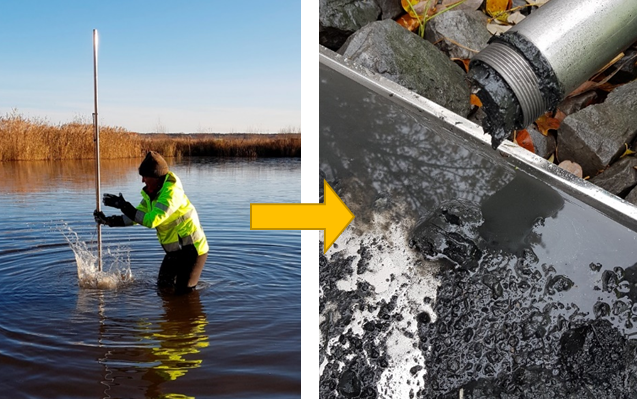 Stormwater ponds are designed to remove particles from stormwater. Therefore, over time, sediment accumulates in these ponds and must be removed to maintain design performance. But what pollutants are found in this sediment and what are the environmental risks of its disposal? To explore this question, Kelsey Flanagan, post-doktor at LTU with the Drizzle project, has conducted a detailed screening involving 7 metals and 259 organic pollutants (mineral oils, PAHs, BTEX, chlorophenols, chlorobenzenes, chlorinated aliphatics, aldehydes, PCBs, alkylphenols, phthalates, brominated flame retardants including PBDEs, perfluorinated substances or PFAS, organotins and pesticides).

In comparison to Swedish and Norwegian regulatory limits, Zn is the most critical trace element while alkylphenols and mineral oils appear to be the most critical organic pollutants. Because levels of contamination were very different between sites (with variations of up to three orders of magnitude for some organic pollutants!), this work has shown that stormwater pond sediments do not all pose the same risks and a single management strategy would not fit all sites.