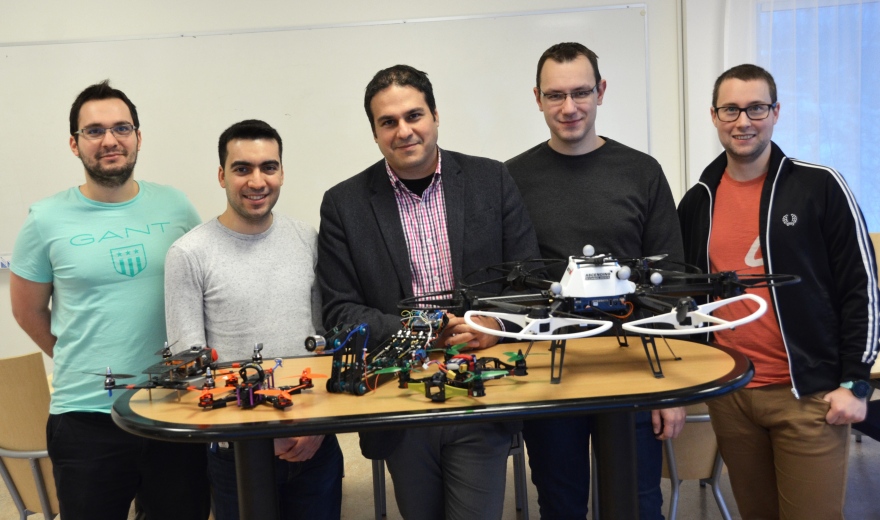 Every year, IVA sums up Swedish research and highlights research progress and top engineering achievements. In 2017, on this list of impressive achievements, the work from the Robotics Group has been featured.

– Our work with autonomous aerial inspection of wind turbines is part of the EU project AEROWORKS. The aim of the project is to get multiple autonomous drones to work collaboratively inspecting ageing infrastructure. In this specific case, it was wind turbines owned by Skellefteå kraft, a company that also participates in the project, says George Nikolakopoulos, Professor of Robotics and Automation.

What does this recognition mean to your research group?

– It is very good that our last four years of activities in the area of autonomous drone inspection and interaction have been recognized by IVA. For us and of course for Luleå University of Technology, it is a stamp of quality and a constant inspiration to continue working intensively in the field of autonomous drones, says George Nikolakopoulos.

– This publicity will spread our work and our expertise all around Sweden, while reaching not only academic partners but also many strong industrial stakeholders. Our technological readiness in the field of autonomous aerial inspection has reached commercialization levels and I believe that this has been identified by IVA as well as the potential impact of aerial inspection in the industrial sector.

The Robotics Group at Luleå University of Technology is investing heavily in the areas of aerial robotics and biorobotics with advanced AI, two of the most emerging areas in the field with potential to impact everyday lives.

– Our aim is to bring robotics outside the lab and create a real and measurable impact, says George Nikolakopoulos.

The full announcement is located in the video below and we are featured at 56.05 min in the film.