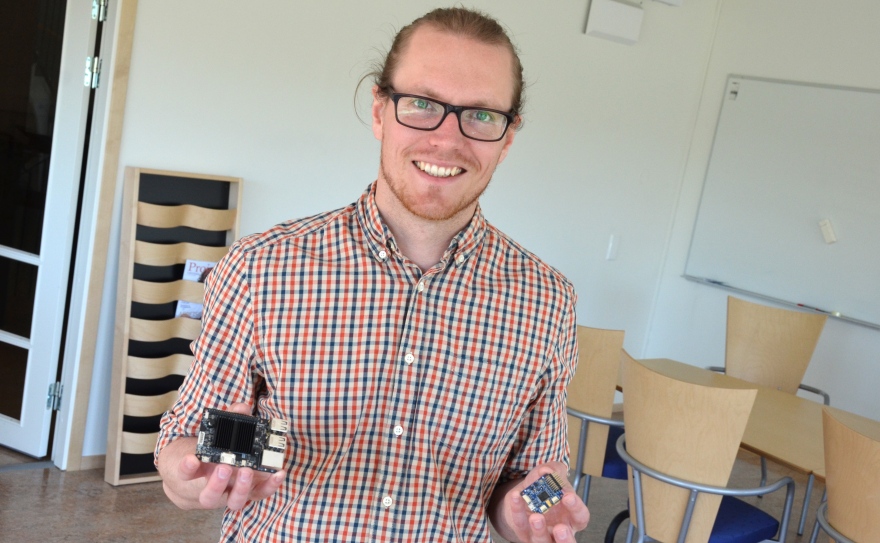 Elias Small has received a scholarship from Per Bengtssons stiftelse and is now going to develop a standard for microprocessing technology. Photo: Linda Alfredsson View original picture , opens in new tab/window

Elias Small will use the scholarship to develop a system to standardize the software used when a robot's real-time system "speaks" with the hardware, that is, a computer. Simplified, it is about standardizing the link between the two systems real-time, software, and non-real-time hardware.

– Previously, everyone has written their own code for the sensors to talk to the computer. If there is a template for the software instead, it would save us a lot of time, says Elias Small.

– But there are more benefits than winning time when making new prototypes. We also ensure that we get a system from which we don't lose data when conducting experiments. And with a standard, it is also easier to troubleshoot and fix if something breaks.

For Elias Small's part, the work is a lot about finding out which code to use. Thus, there will be a lot of programming.

– I like microprocessing technology; the link between hardware and software. My degree project was about drones and I have an interest in robotics and programming. Therefore, this task fits me perfectly, says Elias Small.

In addition to Elias Small, the foundation also awarded scholarships to Thasshwin Mathanalal and the Bexus project EXIST.

Per Bengtssons stiftelse has been announcing scholarships for students and PhD students at Luleå University of Technology since 2007.