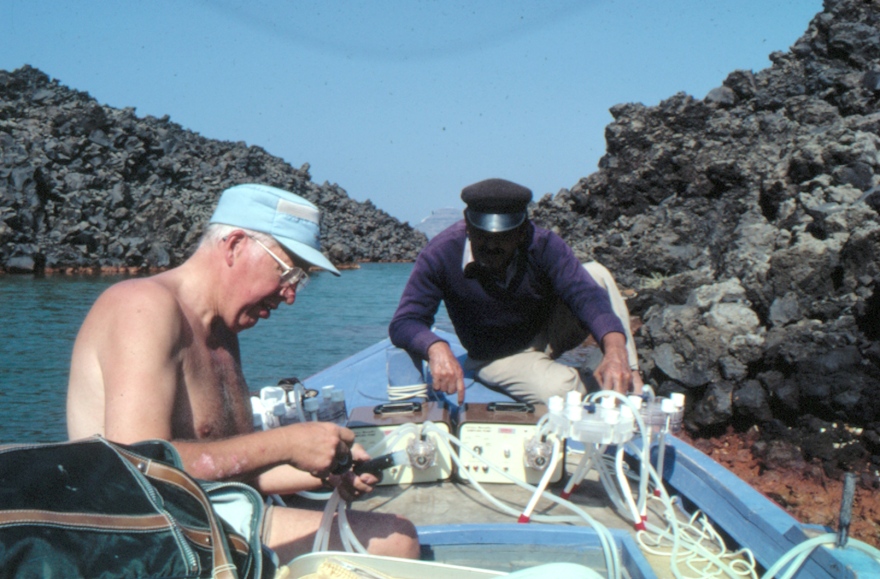 Kurt Bostrom to the left when sampling hot volcanic hydrothermalt waters of Santorini in Greece.

Kurt was the university's first professor of geology and engineering faculty who also became the first dean. Kurt Bostrom was a forerunner and inspiration in many ways. He had an international career at the Scripps Institution of Oceanography in Southern California and partly Rosenstiel School of Marine and Atmopsheric Science in Miami, Florida. During the years in the U.S., he published fundamental geochemical contribution to the emerging theory of plate tectonics. His work on mittoceana backs was for several years the most cited article in the discipline.

When Kurt started his professorship in Luleå he also broke new ground in analytical chemistry. Kurt was way ahead of his time, when he in the 70's introduced the so-called plasma technology for elemental determinations. He was the real pioneer in partly uncomprehending contemporaries. Today, the analysis methodology for granted in many research institutions. Kurt's bold technological leap was also spreading to the commercial market for chemical analysis. The technology he introduced would change what the commercial players bring to deliverin  chemical information to include environmental and industrial sectors. The analysis technique Kurt initiated almost 40 years ago continues to evolve, reflecting the importance of his work. Luleå University of Technology and the Kempe Foundation has recently granted funds for new advanced analysis techniques for the study of stable metal isotopes.

During his active time in Luleå Kurt initiated an effort in geochemical research focusing on soil and water systems in the boreal forest belt, Kalix and Torne Rivers and the Gulf of Bothnia, and the Arctic. Today, the forest belt of the northern hemisphere and the Arctic an important part of research into global warming.

We remember Kurt as a very charming and well-educated scholars. It was always exciting to hear what he thought of everything from books, music to current geochemical issues. His curiosity in the daily activities created a special atmosphere that still today can be pronounced at the call of geochemical research during coffee breaks at the department.