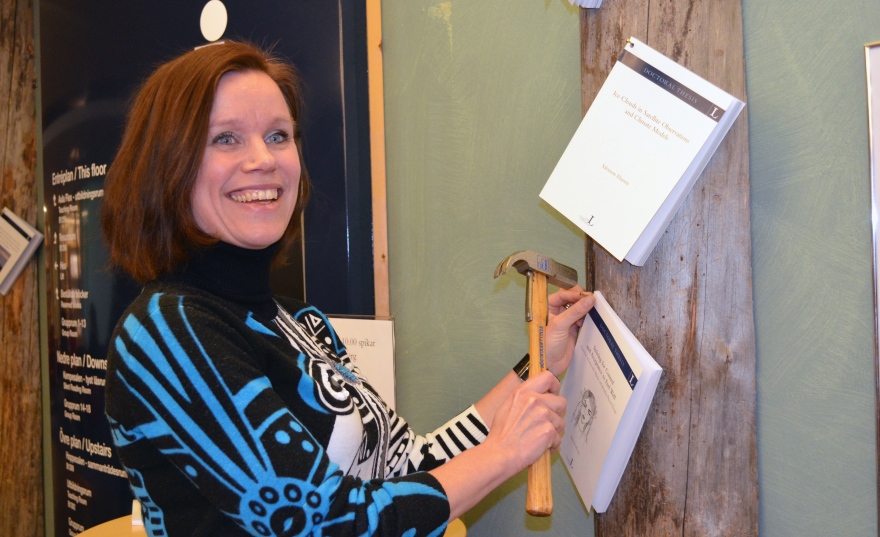 PhD Stina Rutberg nailed his thesis at the end of February. Photographer Luleå University of Technology

- Physical therapy may be an option to increase the control of the disease, its acceptance and the persons general well-being, says Stina Rutberg, a doctoral student in physical therapy at the Department of Health Sciences, Luleå University of Technology.

The key to relief migraine is medication, but people who were interviewed in the study expressed fear that a high intake of medications would eventually harm them or create an addiction. That was a big reason to why they turned to physical therapy. They felt that the treatment had given relief of symptoms and a general increase in well-being, which in turn gave a sense of control over migraine.

Migraine is one of our most common diseases, almost one in ten people suffer from migraine. In middle age, it is almost twice as common among women as compared to men.

The interviews showed that many people with migraines have experienced that they are not taken seriously when they turned to healthcare or that the medical staff did not have much knowledge about migraines. To find people who are treated for their migraines with physiotherapy, 38 clinics in northern Sweden was contacted and only nine of them treated at least one person for migraine.

- It seems like it is not very common for people with migraine to use physiotherapy. The first alternative for treatment is to get prescribed medicine and if they are to test physical therapy they often must do that on their own initiative, something they may not even know they can do, says Stina Rutberg.

Stina Rutberg has in her thesis, "To strive for control and acceptance to feel good - experiences of living with migraine and participate in physical therapy" made depth interviewed with around 40 people with migraine to get their views on what it is like to live with and handle the disease. Physiotherapy is for these people an investment and a way to heal themselves.

The purpose of physical therapy for migraine patients is to give them tools to increase their well-being in the form of exercise, stress management and relaxation.

- An important part is being able to trust the physiotherapists skills, be individually treated and feel betrusted. Much depends on the actual meeting, not just the treatment itself, and both are equally important for the results to be good, says Stina Rutberg.

Read more about our research in physical therapy

Learn more about our Physiotherapy Program