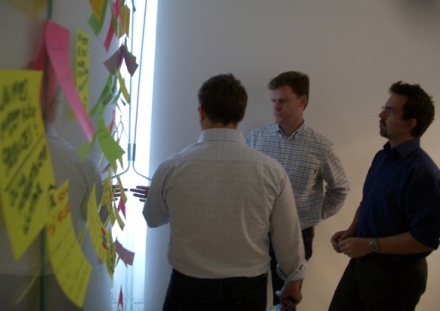 The Tiger Team approach introduces a new way of working where academia and industry focus on jointly solving a specific research problem in a rapid response environment by refer to, for example, running an industry demonstrator together.

A movie (Sneakers) in 1992 made the term ‘tiger team’ known in the context of hackers breaking through computer security, not with the intention to steal data, but to highlight weaknesses of the computer system [2]. To make the system owner aware of the trespass, the hackers left evidence of their activities, a note, a message etc. Eventually, tiger teams were hired by organizations to check up the computer security, so tiger teams are also hackers that provide data-penetration services (ibid.). The group process of a tiger team in these services might be similar to what we are aiming for; however, the purpose to apply a Tiger Team approach is completely different.

Another application of a namesake to tiger teams which relates to the idea of a specialized group performing a specific task is Cheetah teams [3]. The task for a Cheetah team is to solve unexpected problems that are threatening to delay or disturb a running project. A Cheetah team consists of a few selected people separate from the product development team (ibid.). The Cheetah team takes out the problem from the ordinary activities, thus they can focus their efforts on solving the problem and, by the same token, avoid disruptions in the running product development project (ibid.). Some factors that characterize a Cheetah team are that the team is always ad hoc, initiated for a specific mission and is dissolved when it has solved the problem (ibid.).

The inspiration for our Tiger Team approach stems from a context of concurrent engineering, i.e., The Dapra Initiative on Concurrent Engineering [4]. The approach was seeking to “…stimulate small-team interactions among people in large, dispersed organizations.”(ibid., p.26). The aim was to enable similar freedom of interaction and information exchange among these people as in a small team working in the same room (ibid.). The structure in this way of working emphasized instant communication with each other, accessing, sharing and storing up-to-date information in a transparent way (ibid.). A tiger team is “… distinguished by both a high level of coordination and a deep interpersonal dialog among the members.” [5]. It is important that the members of a tiger team feel free to say what they think and that every member participates in a committed way. The physical place for a tiger team is, in some cases, suggested to be an informal living room, since such environment works better than a traditional conference room (ibid.).

Tiger teams are not work groups. Information exchange and coordination are typical activities for a work group, e.g., a traditional staff meeting [5]. A tiger team meeting is different from informative meetings. To be productive, such meetings insist on also facilitating a social process.

WORKING IN A TIGER TEAM

The selection of participants in interdisciplinary tiger team groups is important. A tiger team must include people providing ownership and motivation to accomplish results, as well as providing integration of a diverse set of outside expertise to the mainstream project team Pavlak]. To be able to make all participants’ available information and knowledge explicit, all members must be given the opportunity to speak in meetings. The restricted air time must not be consumed by a few people [6]. Therefore, creating a climate for rich dialogues are critical. A problematic situation is that people holding different competences and interests also speak different languages [7].

Certain ground rules are suggested to provide team building, for example, listen for newness, staying loose until rigorous conditions count, questioning for understanding only [5]. Creativity is part of the Tiger Team work. Purposeful leadership is an essential part of effective tiger teams; one reason that these teams are rare is that the leadership style is difficult to implement (ibid.). In a tiger team, both content and process has to be managed; this requires a split leadership (ibid.).