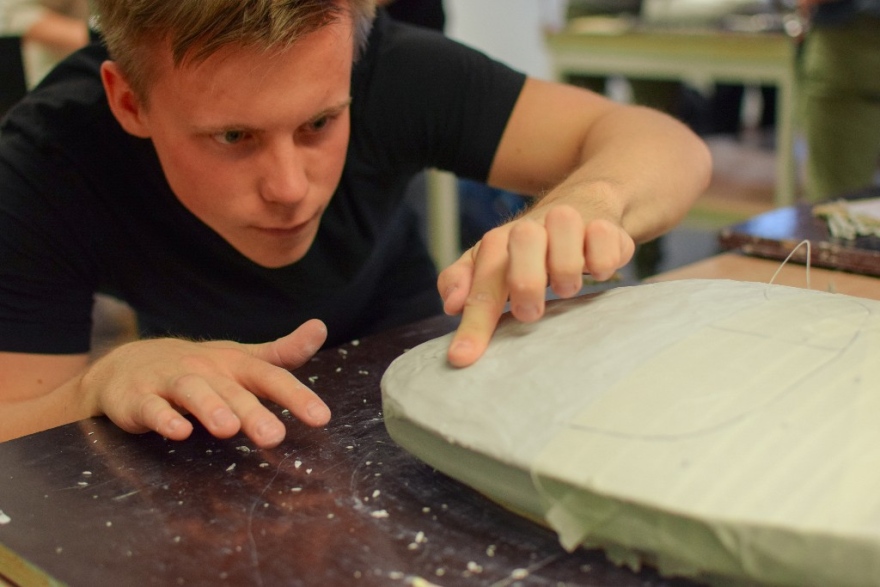 – The film was my way of showing what I can do. It helped me get my first job, says Emil Larsson who works as a design consultant at Knightech in Solna.

One of the product concepts that Emil Larsson shows in the film is an augmented reality headset aimed at children and young people. Augmented reality is a technology for adding computer-generated sensory impressions to a physical environment in real time. The technology is used, for example, to draw arrows to a specific destination through a mobile camera or to place game characters in physical reality in a computer game. Emil Larsson worked on the project during his semester at Western Washington University in the USA, with which Luleå University of Technology has an exchange agreement.

In another part of the film, Emil Larsson shows the robot vacuum cleaner that he designed together with his fellow students, in one of the training courses. The task was to design a robot vacuum cleaner based on the design of a well-known car company, in Emil's case a Tesla. Based on the analysis of Tesla's design language, sketches were created that were transformed into a clay model which was then 3D-scanned to be able to create a 3D model. With the help of a CNC machine and workshop equipment, a physical model in plastic could then be created that looked like a real product.

– We made a little happening of the presentation by driving a real Tesla into the classroom and lifting our vacuum cleaner out of the hood.

The film also shows an app that boat owners can use to monitor their boat and book a jetty. Furtherly the film shows an aluminum wood basket.

– It was important for me to not only show the finished product but also the process itself. It's pointless to create a cool technical gadget that does not help anyone. An important part of education is therefore to put people in focus. This means, among other things, that you do interviews with intended end users about their needs and that you test prototypes on them.

He got the job as an interaction designer at Knightech when he participated in the company's recruitment day in the spring of 2020. In connection with it, he showed his film. In his role as a design consultant, Emil Larsson assists companies that need help in making their technical innovations understandable and useful to people. He currently has a consulting assignment for Scania.

Had never been north of Sundsvall

Before Emil Larsson, who is from the Stockholm suburb of Haninge, started studying at Luleå University of Technology, he had not been north of Sundsvall. But as a ski enthusiast, both downhill and cross country, the new environment suited him perfectly.

– We were a group of four friends who moved up at the same time. During my studies, I also made a lot of new friends that I still keep in touch with. Luleå University of Technology has a fantastic student atmosphere with students from all over the country. Most live near the university.

Emil Larsson is also very satisfied with the education itself.

– The education is very broad. You do everything from designing digital and physical products to creating entire factories, always focusing on people's needs and creating a sustainable future. You learn theory, in the form of math and physics, which you then have to apply in practical and creative elements in  technical design. During your studies, I can recommend that you create a design portfolio to show potential employers what you have learned. I myself have benefited greatly from this.