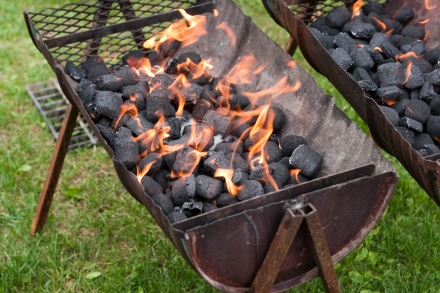 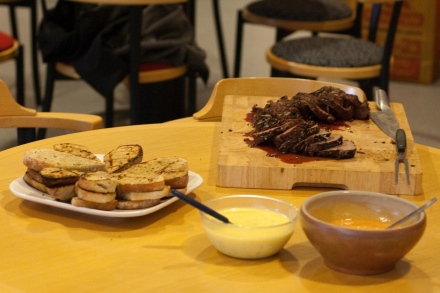 It is difficult to determine what the real tradition of our BBQ Cook off is. Is it that every year we meet, barbecue, eat and evaluate good food? Or is it that the rules change every year? Well, the rules were changed this year also. This year we competed as teams with Vinit Parida and Geza Fischl as specially invited guests.

The competition starts with several secret planning meetings, Charlie, Geza and Johan W sausages certainly won that part of the competition. Though, they were not planning every- day-ordinary-sausages, but rather meticulously homemade specials,”Zouaver av Zydeco”. We enjoyed them with traditional side dishes. Team Charlie, Geza and Johan W had even designed incredibly good looking t-shirts to strengthen the impression of the food. The international cuisine is growing in the BBQ Cook off. Not only did we taste American food this year, but also Indian. Koteshwar and Vinit competed with “Royal Hyderabadi Prawns” in which the shrimp was accompanied by incredibly exciting and tasty side dishes. “What is that red stuff? It is awesome!” Side dishes appeared to be important in this year’s competition, there was plenty of them, all delicious.

A novel contribution this year was that a desert did qualify as a contribution. Marco and Alessandro competed with”Fantasia di mascarpone con ananas alla griglia”, letting us enjoy a delicious Italian desert style. How to cook it on the grill is and will remain a secret.

All dishes are barbequed, presented and tasted in accordance to a strict time schedule (or at least – planned – according to a strict schedule). All participants grade the dishes on a 7-point scale based on an overall impression. Team Peter, Christian and Johan H won this year’s desirable first place with their “Herbcrusted Tenderloin” with two kinds of sauce and sourdough bread.

When the congratulations from the competitors had petered out, a mumble could be heard. It sounded as if there was something wrong with the rules. :-) 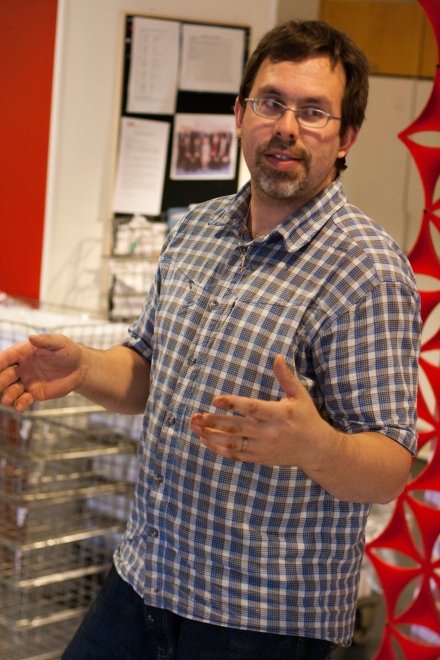