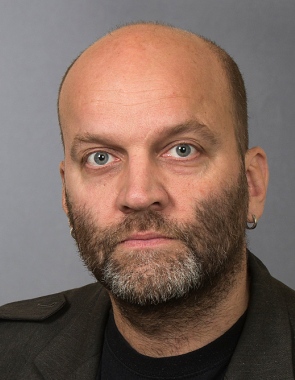 David Myhr was born in Piteå, Sweden, in 1970. He studied at The School of Music, Luleå University of Technology, in Piteå, and was awarded the degree of Master of Fine Arts in Music Education in 1994. Already a leading Beatles expert as a teenager (competing on Swedish national TV on the subject in 1988), it was only natural that as his degree project he played the role of Paul McCartney in the concert production Sgt Pepper Live (1994). It was brought on tour to Stockholm and Liverpool and was broadcast on Swedish TV. The project also led to meeting the Beatles record producer George Martin.

After university Myhr moved to Stockholm and took on a career as a freelancing musician and music business entrepreneur, and was also engaged as a Creative Manager at Sony/ATV Music Publishing.

His main artistic output during the 90's was the internationally acclaimed power pop band The Merrymakers, which released the albums No Sleep 'til Famous (1995) and Bubblegun (1997). On the latter Myhr co-wrote and worked with one of his biggest sources of inspiration, Andy Sturmer from the American band Jellyfish. With The Merrymakers he achieved international success, mainly in Japan where the albums sold over 100,000 copies, and put in several appearances in the U.S. where the records were also released.

During the 00’s, as a music producer Myhr, together with former colleague and bandmate Anders Hellgren, produced various singles and albums for Japanese artists in their own studio Monogram Recordings in Stockholm.

His solo debut album Soundshine, was released in 2012. On the album Myhr collaborated with Peter Morén (Peter Bjorn & John), Andreas Mattsson (Popsicle) and Andreas Dahlbäck (Ulf Lundell, Anna Ternheim, Per Gessle) among others. Following the release, Myhr made live performances in Osaka, Tokyo, Stockholm, Madrid, London and New York, among other places.  The album was ended up at the very top of several "best album of 2012"-lists in the power pop blogosphere.

In 2014, he released the EP Record Collection (the title song co-written with Peter Kvint), including a song recorded at Abbey Road Studios. The same year he was invited by film music composer Jimmy Lagnefors to write a couple of songs for the movie Micke & Veronica, including ”Vänta Inte På Mig”. In 2016, the same duo also wrote the song  ”Spellbound” for the movie Flykten till Framtiden.

In 2018 David Myhr released his second solo album Lucky Day, It was recorded in Nashville with producers Brad Jones (Josh Rouse, Jill Sobule) and Andreas Dahlbäck and the majority of the songs are a result of a transatlantic research trip in February 2015 through Los Angeles, Nashville, and New York City where Myhr did writing sessions with a diverse group of songwriters that included Bleu (Demi Lovato, Hanson, Selena Gomez), Linus Of Hollywood (Bowling For Soup, The Charlatans, Mr. Big), Young Hines, Bill DeMain, and Steve Schiltz (Hurricane Bells). Lucky Day was released by British indie label Lojinx on May 18th, 2018. The album was praised by the international power pop community, and Swedish National Radio P4 picked up the singles "Jealous Sun" and "The Perfect Place". After the release Myhr played a couple of shows in his hometown Stockholm including a release party at Debaer Strand. But also in such different places in the world such as Sundsvall, Madrid, Burgos, San Diegeo, Los Angeles, San Francisco, Tokyo, and Osaka. The most grandiose however was the show in his former hometown Piteå in November 2018 at Black Box, Studio Acusticum. A concert which was can be seen in its entirity in the concert Movie "Made in Piteå" which was also released as a live album.

His songwriting abilities and extraordinary skill at melody has led to a long-term professional relationship with Sony Music Publishing Japan. This has led to writing and production opportunities for various Japanese artists such as Miku Kakoi (Top 30 on the Japanese Billboard in 2011 with a song written by Myhr) and with PuffyAmiYumi (for which Myhr has been involved in writing five singles, the last of these with successful Swedish songwriter/producer Peter Kvint). In 2017 Myhr was chosen by Export Music Sweden as Sweden’s representative at the Nordic-Japanse Tokyo Hokuo Music Song Writing Camp in Japan.

Myhr has also specialised in producing jingles together with production company Dobedai and is heavily featured both as a writer/producer/performer on Swedish commercial radio with jingles like Insplanet, Ryds Bilglas, Servicefinder, Vuxen.se, and numerous others.

As a musician (vocals, guitar, piano) Myhr has a broad knowledge of genres within popular music but specialises in classic British and American 60/70's rock,  power pop and, in particular the music of The Beatles. He has been an active performer and entertainer for thirty years as everything from troubadour, Beatles interpreter, and session musician, to a member of various cover bands.

He has also been involved in numerous concert productions. For instance as a member of various ABBA tribute shows playing the role of Benny Anderson. He has played both in his own group Super Trouper, but also in the internationally successful production The Show – A Tribute To ABBA touring together with members of the original ABBA band like Janne Schaffer, Lasse Wellander, Uffe Andersson, and Roger Palm. In this context Myhr has toured the US (including shows at the legendary Hollywood Bowl), Spain (World Expo in Zaragoza 2008), Cyprus, Holland, Belgium etc.

Myhr has for a long time combined his career in the music business with work as a music teacher. From 2001 he was been a regular guest producer at the Studio Musician Program at the School of Music in Piteå (a program for which he was also in charge for in 2005/6). He’s also been teaching on high school level – he started and was in charge for the program "Music production and Sound Engineering" at Nacka Gymnasium between 2001-2004. Furthermore, Myhr has been involved as in the music production for various educational books,  in collaboration with authors like professor KG Johansson, professor Jan-Olof Eriksson, and Hans Hjortek.

Since 2012, Myhr is a Senior Lecturer at LTU teaching songwriting,  music production and music business knowledge at the Department of Music, Dance and Theatre under Department of Arts, Communication and Learning (KKL), but has also given classes at the Royal College of Music, Stockholm and Örebro University, and supervised students at Linnaeus University, Växjö. Since 2020 he is also course coordinator for a new education programme for future  teachers of songwriting, musick production and DJ at Stockholms Musikpedagogiska Institut (University College of Music Education in Stockholm).

Within his position as a senior lecturer he is currently working towards a licentiate thesis in a research project tentatively named ”Pop into My Head: An inside perspective on the making and shaping of melodies in popular songwriting”. The purpose of the research project is to study his own artistic practice as a composer of melodies in the pop genre (more specifically the songs on the new album Lucky Day) in order to gain valuable insight into the creative processes involved in making and shaping melodies. Through auto-ethnographic self-observation, with video recordings as the main data source, and by using a methodology of qualitative case studies his aim is to find out what methods or strategies are used for coming up with new melodic ideas and how ideas are evaluated; for which causes some ideas are used/accepted and others discarded. He has made presentations at the Swedish Research Council's symposium for artistic research at Linnaeus University, Växjö, in 2016 and at the 12th Art of Record Production conference hosted by the Royal College of Music, Stockholm, among other places.