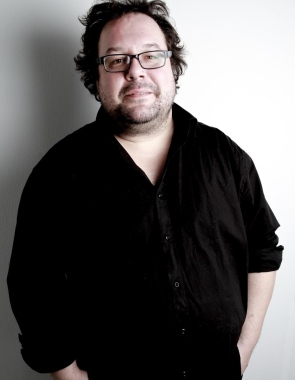 Fredrik Karl Kristian Högberg, born 5 February 1971 in Vellinge, Sweden, is a Swedish composer and producer.[1][2] He resides in the old courthouse in Nyland, Ångermanland (mid-Sweden).[3]

Fredrik Högberg grew up in Svedala, southern Sweden, and studied at the Folk High School of Framnäs, Piteå 1987–1991. Högberg has studied composition mainly with professor Jan Sandström at Piteå School of Music (a part of Luleå University of Technology).[1] He earned a licentiate degree in performing arts at Luleå University of Technology 2012. He teaches composition at Piteå School of Music since 2015.[4]

Works like Dancing with Silent Purpose and Rocky Island Boat Bay are examples of Högberg's humorous approach to his musical creation, and his inclination to combine contemporary art music with elements of popular music.[7][8][9]

Högberg's work is not seldom controversial; while working with the Ice Concerto Högberg shot burning pianos being dropped from 40 metres onto the ice of Ångermanälven.[10] He was charged with environmental crimes, which were later dropped.[11][12] 2016 he wrote the music (in collaboration with singer/songwriter Nicolai Dunger) for the critically acclaimed opera Stilla min eld, inspired by the circumstances of Eva Rausings death in Belgravia, London, 2012.[13][14][15][16]