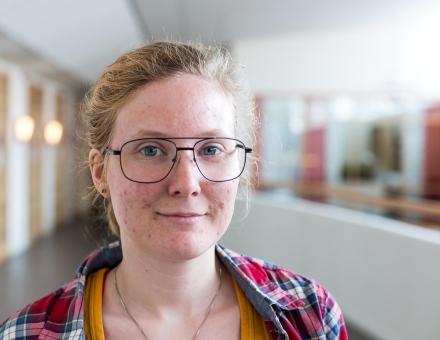 Hilda Broden, a student in the occupational therapy program LTU

- Much is similar across countries, it is just details that are different, says Hilda.

The exchange program ICC@home works so that students from different countries work together on various projects. Cooperation takes place via the web or by email.

- I jumped on it because it sounded exciting, says Hilda who have four semesters of occupational therapy program.

Students from Luleå paired with a Dutch student, and together they got the task to study the work of cp-injured children, as seen from the occupational therapist horizon.

- We read on, each one from his own direction and wrote a report together, says Hilda.

- I had expected that we would use Adobe connect or similar for collaboration, but there was email and Dropbox that we used, she says.

Biggest challenge for Hilda was to write and communicate in a language that none of the participants have as their mother tongue, English.

- What terminology should be used, she understands what I mean, there were things I was thinking about, said Hilda.

Hilda thinks it was an interesting experience to try to work together like this. The project required quite a lot of work, but was worth it, she says.

- I've learned quite a lot about occupational therapists in other European countries, and I've gotten better at writing in English, among other things, says Hilda.