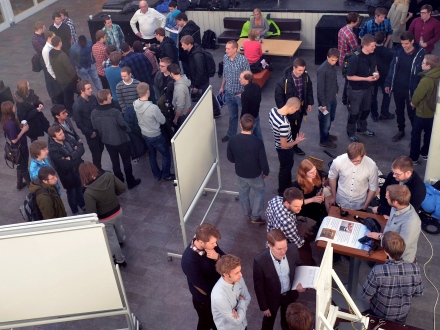 It is third year students at the Master Programmes in Sustainable Energy Engineering and Mechanical Engineering who read the course where the focus is on creating a sustainable society. Just before the students presented their projects, they demonstrated their prototypes in LTU's atrium. Students and company representatives came to see and discuss the practical solutions. 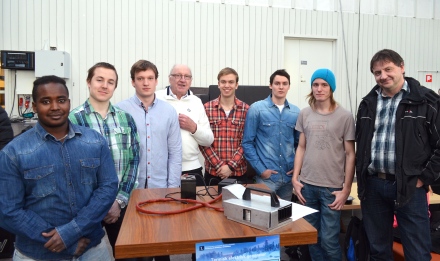 One of the groups had developed a portable thermal electric generator, TEG, which uses heat from a cabin stove and turn it into electricity. It has been developed on behalf of Handelsbolaget Kurt Marklund. Kurt and his son, CEO Håkan Marklund, came to LTU for the group's presentation and from what he could see so far, Håkan was pleased:

– It's looking good, you get a little impressed. Of course we hope to commercialize this eventually, says Håkan Marklund. 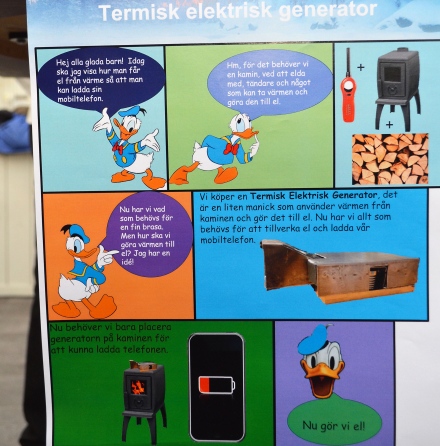 Comic strip of how a TEG works.

Given the many cottages and hunting cabins that have a wood stove but no electricity, it is easy to see that the product meets a need. Still, there are some things to work on, according to project leader Henrik Rånman.

– There are a few things to improve before the product is ready for launch. I, unfortunately, can not go into detail on what it is. The project has generally gone well, but there was much to do especially towards the end. During the project, we have been able to get help from talented people at the university, which obviously helped. The hardest thing has been to work within a short time frame, we would have like to work a bit more on the prototype. 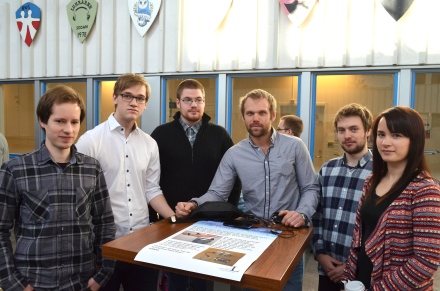 Another group had taken on the task of solving the need to charge devices when being away on outdoor activities. The result is a portable system that is attached to the waist and can be used to charge devices such as a mobile phone. The energy is taken from the arms swing movement when walking, running, cross-country skiing or kayaking.

– The project has gone smoothly and in the end we got what we wanted. It has been instructive to connect electricity to mechanics and to get several smaller parts working as a whole. We believe that there is a market for the product, says Tobias Wretborn at the Master Programme in Sustainable Energy Engineering. 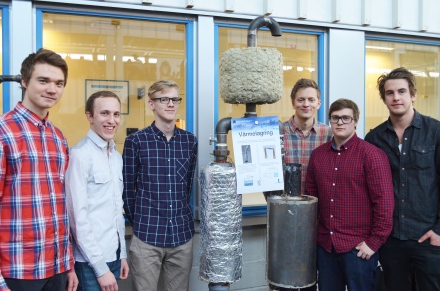 Heat and water in developing countries

Another group had tackled the problem with a simple way to create warmth in developing countries, especially during cold nights. The solution is a chemical heat pump which uses waste heat from the flue gases in a chimney by phase transition of a salt. The heat can then be used at night when demand is greatest.

Access to clean water is also a problem for developing countries. To solve it, a group of students used a simple stove to develop a water purification system based on boiling, evaporation and condensation.

Jens Hardell is the examiner of the course Sustainable Living and he can look back on a successful course.

– Every year I am impressed by how hard students work and the creative solutions they develop. This year's course is no exception, the results are really good and it's fun to see how students develop during the course and become more and more independent as engineers.

According to Jens Hardell the students thought the course was fun and well suited to their education. But the course has also been challenging with a lot of work. Jens believes that many of the products have a market potential.

– Several of the products is enough to commercialize if you like, for example, the systems developed for developing countries.