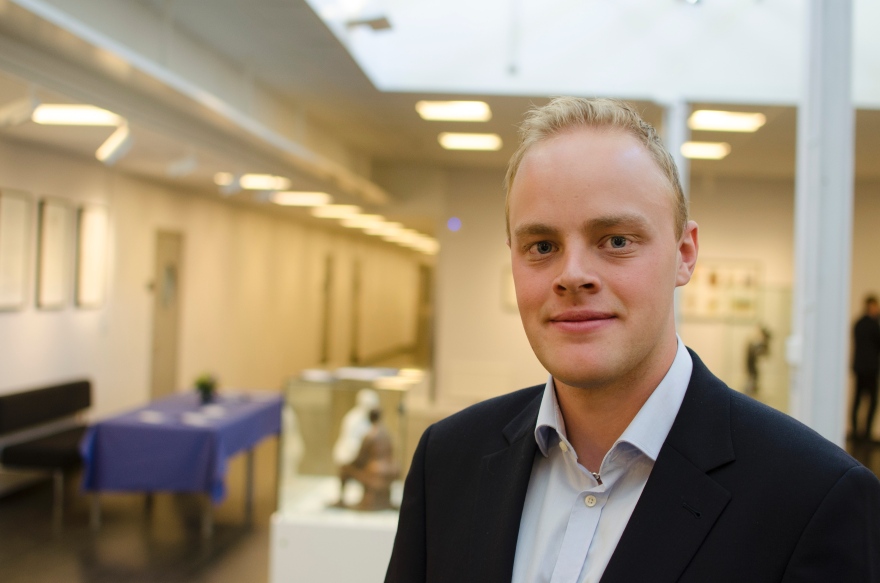 – Who does not like a challenge? It was a very enjoyable and developing experience that for five months does the thesis in Spain. In the beginning it was a little tough to adapt to a new country, but I have developed a lot and have memories for life, says Tobias Thorvaldsson who is now taking his master degree in Mechanical Engineering at Luleå University of Technology.

The thesis focused on improving the method for carrying out fatigue tests on crankshafts at the research institute Centre Tecnològic, CTM, in the town of Manresa, an hour's drive from Barcelona. It was through an employee at Luleå University of Technology as Tobias came in contact with the CTM.

– It was a project about product development that goes from concept development to finished product. It is important to know the crankshaft behaviour under cyclic loads in order to improve the quality of the construction. The result was that CTM now can make fatigue tests with 50% higher frequency corresponding to a reduction of the costs of the tests by a third. The tests now coincide with real conditions for a crankshaft of an engine, says Tobias Thorvaldsson.

The time in Spain has not only been about the thesis. When Tobias Thorvaldsson made new friends in Spain it also opened up also for unforgettable experiences.

– I've partied in Barcelona, ​​driven a Ferrari, went to a winery in France, paddled a kayak in the mountains, and visited Spanish festivals. How many of these experiences had I had if I stayed in Sweden?

Certainly there are cultural differences between Sweden and Spain, but according to Tobias there are even more similarities. So did he experience siestas and hot-tempered Spaniards?

– People are people everywhere. Spaniards have their strange ceremonies just like us, but people still think that the tax is too high, the government needs to change and that Mondays are tough. I have not met anyone who takes a siesta; it feels more like a myth. Obviously there are small differences with late lunches, arriving ten minutes late to meetings and that Spaniards are livelier in their body language. But on the whole I do not think there is a big difference between working in Spain or Sweden.

For those who consider studying or doing thesis work abroad, it is something Tobias Thorvaldsson really recommends.

– Many companies see it as very positive that you do the thesis work abroad. You learn how to manage a multicultural and multilingual environment and you improve your language enormously. Before I had a social network in Spain, it was a bit tough, after a while everything became easier. That start is the hardest also applies to the program in general, as it is almost only mathematics and physics in the beginning. When you passed the first year and starts reading mechanical engineering courses the education becomes much more enjoyable. The third year, you start to have courses of your choosing and work with real companies in the Sirius course.