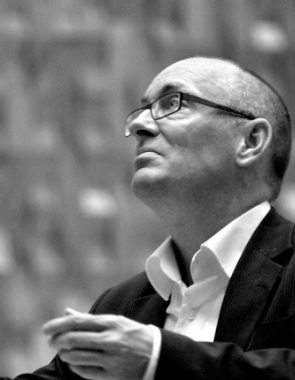 Erik Westberg (b. 1956) studied choral conducting with Professor Eric Ericson at the Royal College of Music in Stockholm.

He has been the leader of numerous choirs, including the YMCA choir in Stockholm and the Oslo Philhar­monic Choir, and he has also been guest conductor of the Swedish Radio Choir, Pro Coro Canada, Coro Nacional de España, Coro Sinfônica do Estado de São Paulo in Brazil and Jauna Muzika in Lithuania. He has also been Artist-In-Residence at Wollongong University, Australia.

Professor Westberg was the founder of the project Choral Singing for Peace and Justice: during the millennium celebrations, 8,000 choristers in 56 countries were involved in this project, singing the twelve-year old Irishman Shaun McLaughlin’s poem Across the Bridge of Hope, set to music by Professor Jan Sandström. Also, the Erik Westberg Vocal Ensemble first held a concert with this centerpiece at Tonga, the first country in the world to enter the new millenium. Then, the morning after, they flew to Samoa – the last country to enter the new millenium and therefore ”they arrived the day before they left” – and once again the Vocal Ensemble held the concert, encircling time.
BBC broadcasted from Tonga and it was seen by the world’s largest television audience in history. The project was supported, by the past present, Secretary General of the United Nations Mr. Kofi Annan, President of Ireland Mary McAleese, Queen Silvia of Sweden, and King Tāufaʻahau Tupou IV of Tonga.

Autumn 2009 he was a visiting professor at Wesleyan University in Connecticut, USA.

Together with Benny Andersson, Orsa spelmän and Gunnar Idenstam, Erik Westberg conducted The University Chamber Choir in Piteå when they premiered Benny Andersson’s, for the occasion commissioned work, En skrift i snön [Scriptures in the snow] (lyrics by Kristina Lugn) during the inauguration ceremony of Organ Acusticum in Studio Acusticum 2012.

With the Erik Westberg Vocal Ensemble he has premiered over 40 works by, among others: B Tommy Andersson, Gunnar Eriksson, Mats Larsson Gothe, Paula af Malmborg Ward, Jan Sandström, Sven-David Sandström and Arvo Pärt. With The University Chamber Choir in Piteå and the Erik Westberg Vocal Ensemble, he has performed over 50 tours to Europe, North- and South America and Asia. His audio catalog includes more than twenty recordings from the record labels Studio Acusticum Records, Opus3, Naxos, and Caprice, several of which has received excellent reviews.

Professor Westberg was awarded the Johannes Norrby-Medallion in 1993 and the Norrländska Socialdemokraten newspaper’s annual culture award in 1997. In 1999 he was honored as Choral Conductor of the Year by KÖRSAM, the Federation of Swedish Choir Associations, and he received the Municipality of Piteå’s annual Culture Prize in 2002.
In 2006 Professor Westberg was presented with His Majesty the King’s Medal of the Eighth Size with ribbon of the Order of the Seraphim, “For distinguished achievements in Swedish Musical Culture.” He received the Swedish Foundation for International Cooperation in Research and Higher Education (STINT) award for Excellence in Teaching 2009.

He has been a member of the Royal Swedish Academy of Music since 2008 and Professor of Choral Conducting and Choral Singing at the School of Music in Piteå at Luleå University of Technology since 2003.