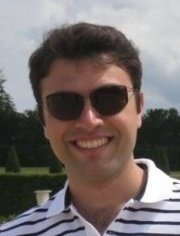 My journey started in August 2007, when I moved from Iran (my home country) to Germany and started my first semester in the SpaceMaster program. With an electrical engineering background, I found it rather difficult at the beginning to cope with physics related courses. However, I did not give up! I worked hard and studied harder and a few years later, I found myself giving lectures in physics courses to the new rounds of SpaceMaster!

There are certain periods in everyone's life that are memorable forever, and the two years of SpaceMaster is undoubtedly one of those in my life. This is not only because I enjoyed the time I spent with my SpaceMaster friends from many different countries around the world and got to learn about their different cultures, and was thrilled by the quality of the lectures, but also because the SpaceMaster program opened new gates to my future career and education in space physics.

After graduation, I was enrolled in a PhD program in space physics in Sweden, and then moved to the University of California at Berkeley and NASA Ames Research Center as a postdoctoral researcher. At the time of this writing, it is about a decade since I graduated from the SpaceMaster program, and wherever I have travelled, either to a conference or visiting space companies, I have seen SpaceMasters from different rounds, working either as engineers or researchers!